The question of purchasing a screen on the facade is usually raised by shopping centers, advertising agencies, city administrations, or ordinary business owners who want to broadcast commercial and social information to city residents.

In any case, in order to mount a front led screen on the surface of a building, it is necessary to order a design solution, coordinate the placement of the screen with the local authorities, and after obtaining permission to make a purchase.

The main task that any LED screen on the facade of a building performs is interactive interaction with the audience (potential buyers in the case of commercial advertising and the general population in the case of socially targeted advertising).

You can increase the interest of the public by broadcasting a facade image from video cameras on a video screen. This possibility is possible only in the case of a synchronous controller, that is, the image on the LED screen of the facade is transmitted in real time and is a display of the computer desktop.

The camera and the transmitter, as well as the receiver and the computer are connected by video cables, and the computer and the video display LAN are connected by cable or fiber (depending on the distance from each other) .In the case of an analog camera, the signal can be transmitted via cable or radio channel (while the distance of the transmitter from receiver must not exceed a distance of 50 m). The receiver connects to a TV tuner or video capture card.

When using IP cameras, cameras and a computer are combined into one local network. At the same time, the software provided by the GT Light company allows you to set the parameters for playing the video stream from different cameras at a given time or at required intervals.

Also, it will not be superfluous to accompany the video sequence with entertaining content: cartoons, video clips, quizzes, jokes, etc.

At the request of customers, facade screens are supplemented with various sound equipment, which can broadcast sound at different distances. However, the maximum distance of the sound range for its comfortable perception (including the presence of the audience near its source) is up to 100 m.

Installation of a front led screen

In order to choose an LED screen for the facade, you need to start from what material the facade of the building is made of. If the facade is completely glass or has windows, and the question of light transmission remains open, then the only correct solution would be an LED transparent media facade screen.

In most cases, the facade LED screen is mounted on a blank wall. There are 3 options for performing the task, while the screen will be serviced from the "face":

If it is possible or necessary to service the led facade screen from the "rear", a structure with a depth of at least 0.5 m is assembled on the facade of the building (the distance is quite sufficient for finding the person serving the screen), on which the screen blocks (steel, aluminum, plastic, aluminum composite panel).

When you contact the GT Light company by calling the toll-free number +1 786 292-30-93, you will receive the most detailed information about each type of video screens, their maintenance, differences, as well as answers to any questions that arise and you will be able to make the right choice.

You can also send a request for the desired type of equipment or write to the company manager in the online chat and get a response in real time.

See also
Similar products.
List of popular products of our company.
Catalog
A complete list is presented in the section product catalog.
Price
A table of ready-made solutions with popular models and sizes. The cost is indicated excluding installation. For the calculation of the actual cost of equipment, please contact our specialists. 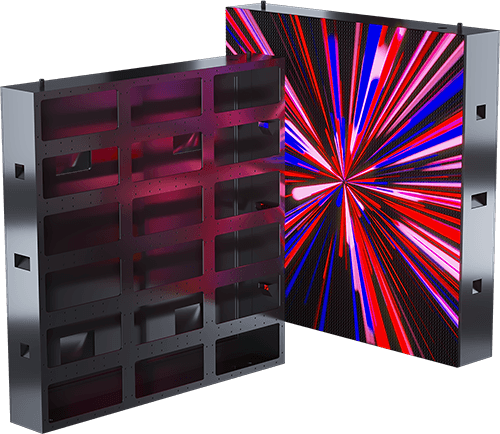 Work experience 17 years
Our company has been successfully operating in the field of LED equipment for 17 years, objects in 15 countries of the world
Warranty up to
5 years
We provide a guarantee for our products from 1 to 5 years, depending on the type of equipment
Production from
7 days
If necessary, our production can produce 300 square meters in seven days 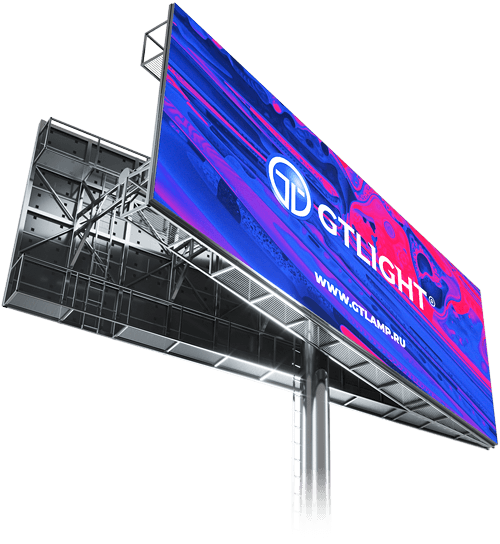 Trendsetters
The developments of our engineers and designers are subsequently used by other manufacturers
From project to installation
We have all the necessary facilities to implement projects of any complexity and scale
Made in Russia
Our main production of LED screens is located in Russia (Kemerovo region, Novokuznetsk)
The equipment complies with the European and Eurasian quality standards, has low power consumption and electromagnetic compatibility 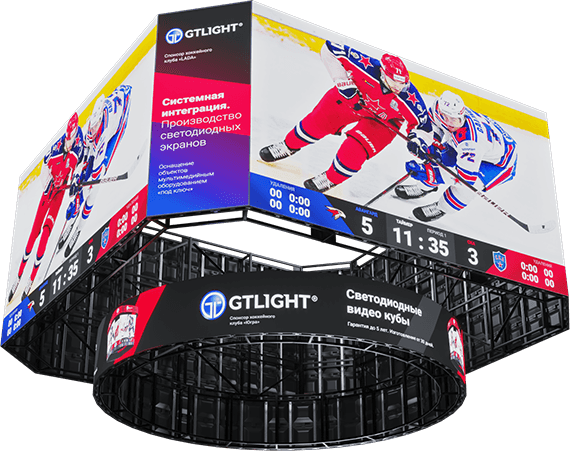 Made in Russia
Complex of technical solutions for sports facilities of any scale: from video cubes to referee systems
Our clients
Detailed information about us is presented in the section about company.
Products
Our projects
8 800 555-05-07
Products
LED screens
Media facades
LED traffic displays
LED scoreboards
Product сatalog
Other
Site Map
Our projects